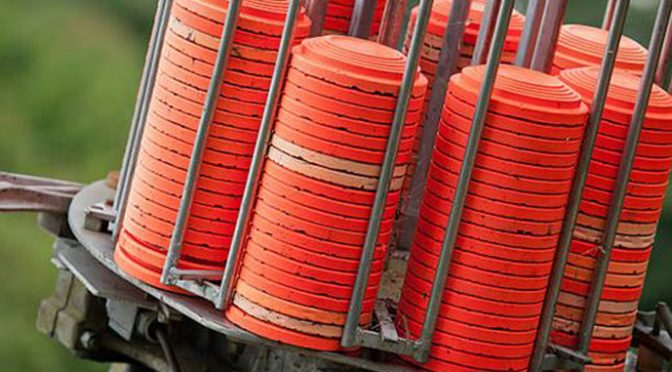 Sporting clays has its origins in England. The game is designed to simulate bird shooting in the field, except it is done using clay targets. Shooters, in groups of 5 or 6 walk around a course that has 10-12 shooting stations. Each station is designed to simulate a certain species of game, such as crossing mallards or rising pheasants. A round of sporting clays usually consists of 50 or 100 birds and is mostly done in a competitive challenging environment.

The Saskatoon Gun Club has a 16 station walk around sporting clays course with each station having 2 machines. The course is continually changed throughout the shooting season. The difficulty level has been designed so that there are target presentations for all skill level of shooters. We try to set it for 30% beginner, 50% intermediate and 15% challenging and 5% fairly difficult. It is laid out so that there will be a mix of these targets all throughout the course so that experienced and beginner shooters can shoot in a group.

There is a multitude of presentations, including rabbits, springing teal, midi, overheads, chandelle, battue, crosser, incomer, outgoing, quartering in and away, 2 towers, with the last station showcasing the poison bird. 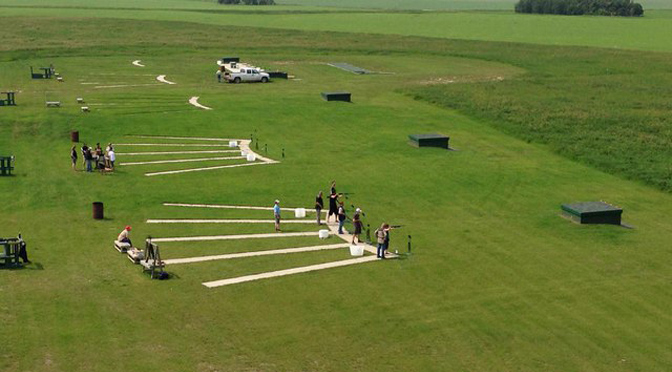 The word “trap” refers to the usage of a trap in which a live bird was placed and released on command and then an attempt was made to shoot it. The earliest printed description of this sport was in Feb. 1793 in England. It became one of England’s most popular sports and migrated to the United States in 1831. The evolution of the sport replaced live birds with glass balls and then clay targets. The clay is called a “bird” and the machine which throws the bird is the “trap” and it is housed in a “trap house”. The shooter is 16 yards behind the trap house, and targets rise and fly away from the shooter.

A round for one person consists of 25 shots, five each from five shooting stations, the object being to score the greatest number of broken targets. 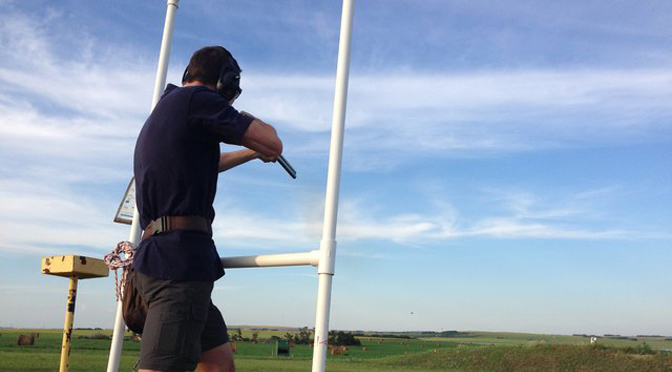 Five Stand is a type of shotgun sport shooting similar to sporting clays, trap and skeet. There are five stations, or stands and six to eight strategically placed clay target throwers(called traps). Shooters shoot in turn at various combinations of clay birds. Each station will have a menu card that lets the shooter know the sequence of clay birds he or she will be shooting at (i.e. which trap the clay bird will be coming from) or in a sequence unknown to the shooters.

Typical five stand targets set up at the Saskatoon Gun Club are a rabbit (target bounces across the ground), chandelle (target loops into the air), overhead (a 30 and 40 foot tower with target coming from behind), standard skeet high house and low house shots, springing teal (target is launched 70 yards straight up into the air), battue (a wafer thin target comes into range on thin edge, turns onto its wide side and drops rapidly), mini (target is 1/2 the size) and midi (target is 3/4 the size), quartering away targets, incomers (targets that come from far out and either fall at your feet or go over your head), and straight away targets. These targets all travel at varying

All these different target presentations provide for constant entertainment as well they are an excellent training exercise for the fall bird hunt.

(shells are permitted on all singles)

Additionally, if a certain target is giving you grief, providing the field is not too busy, ask the club manager if you can practice specific targets.

The typical gun for 5-stand is a 12-gauge with the choke of your choice (SK-IC-MOD) and a barrel 26-32 inches long. Although many shooters favor over/under shotguns, pump and auto loading shotguns are also common.

The shot shells used in 5-Stand may vary slightly with shooters preference and wind conditions. The standard load contains 3 drams equivalent of powder and 11/8 ounces of # 71/2, 8 or 81/2, 9 shot. Loads with only 1 ounce of shot are also popular.

The Saskatoon Gun Club has North America’s Largest 15 station, 5-stand field. The machines vary in difficulty to accommodate both the novice and the experienced shooters. Shooters can choose to shoot the Programmed Menu or select Specific targets as singles, following pair or true pair.

In addition to the typical 5-stand shooting format the controllers can be changed to a flush/flurry mode where the targets come out at random intervals from unknown locations. This can be shot by individuals or as a team. One of the existing settings, when shooting solo, is to shoot 25 targets consisting of a combination of singles, doubles (i.e., single, 2 second delay, single, 6 second delay, double, 4 second delay, double, 7 sec delay, single, 3 second delay, single, etc). This is a very fast action game in which the 25 targets are shot in less than 2 minutes. To increase the complexity, the game can be shot as a team of two and sometimes more individuals at the same time. With the team, there may be up to 4 targets coming out at one time so you had better figure out with your partner which target each of you will be shooting at (doesn’t this remind you of real bird hunting where everyone shoots at the same bird – the easy one)